skip to main | skip to sidebar

I've decided to try and share the voices of the brilliant young women we serve by sharing some of their essays anonnymously on my blog. Hopefully these essays give you a better idea of the bridges that Akili Dada is bridging

"I am the last born of our family which consist of father, step-mother and eight children i.e. five girls and three boys. My mother passed away in the year 1998, when I was only four years old. Actually, I didn’t even understand what was going on because I was very young. After one year of difficulties, my father decided to marry a second wife, who could take care of me at that very age. At first, she treated me so kindly but afterwards. She gradually changed and till now, she was very negative attitude towards me. I have perceived such a tough life till now I used to walk about two kilometers to my former school. When my KCPE results were out, all my family members were proud of me, but most of the villagers and even including my step-mother felt so envious about it. Some of them started talking sarcastically because they knew that my dad couldn’t manage to educate me. All my sisters and brothers did not go through secondary education apart from only two who joined but were unable to complete due to lack of such school fees. None of them has a job. My elder brother had luckily got a house job in Eldoret but unfortunately, he was involved in a road accident where he was knocked by a car and broke his neck bone. It was replaced by a metal and therefore could not be able to continue working. My father has no permanent job. He only does a bit of iron roofing in which he is not even trained. He just does it for the sake of feeding the family. The work is just available once in a while. On the other hand, my step mother has no job at all, yet she came with her three children and my father has to care for all of us. When some of my father’s friends discovered that I had excelled in KCPE, they volunteered to donate some money for my school fees and equipment. However, that was only enough for first term. There is no other way my dad can get money to pay my school fee. Most of the things I came with in school were just donated by some of our kind neighbors. Some books which were required in school were just second handed to me by kind hearted people because my father couldn’t afford to buy me new ones. My father is really stressed about the increase in school fee because he has nowhere to get help.
I sometimes feel so depressed and neglected when people talk and boast about their mothers because I don’t have one. This feeling of motherlessness keeps tinting my mind. I am sure that if ever I get a scholarship all these feelings and stresses will get out of my mind. I just pray that God may work in my life. I am trying the best I can to work harder in order to achieve my goals in life. I happen to get sponsorship; I will be so grateful and even my depended on to uplift the family. I promise that if I ever get a chance I will double my efforts in academics. My aspirations are to get educated, help my father in his old age together with my step mother and also uplift our entire family. I would like to have a good desirable job and live a better life in future".
Posted by Wanjiru Kamau-Rutenberg at 3:34 PM 6 comments: 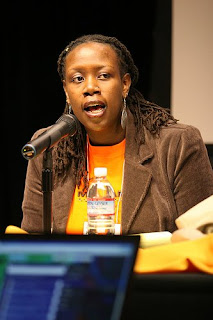 I had a wonderful opportunity to speak at Barcamp Africa held on the google campus on October 11th.

I spoke on the first panel and focused my talk on exploring political trends on the continent as well as sharing my experiences with Akili Dada.

I also led a second breakout session in the afternoon exploring strategies for women's empowerment on the continent.


It was an absolutely wonderful day with a lot of networking and learning including meeting one of my heroes, David Kobia of Ushahidi (what I think is one of the most innovating inventions/creations to come out of Africa)

Here are a couple of links about the day:

Still interogating the concept of giving

The Interns (Allison, Maria, Briana) and I have been interrogating the concept of giving and how Akili Dada should mediate the relationship between our well intentioned donors in the States, and our scholars in Kenya. We're looking over this passage from one of my favorite texts, The Prophet, by Khalil Gibran:

It is well to give when asked, bu tit is better to give unasked,
through understanding;
And to the open-handed the search for one who shall receive is joy
greater than giving.

and is there aught you would withhold?

All you have shall someday be given;
Therefore give now, that the season of giving may be yours and not
your inheritors'.

You of ten say "I would give, but only to the deserving."
The trees in your orchard say not so, nor the flocks in your pasture.
They give that they may live, for to withhold is to perish.

Surely he who is worthy to revive his days and his nights, is worthy
of all else from you.

And he who has deserved to drink from the ocean of life deserves to
fill his cup from your little stream.

And what desert greater shall there be, than that which lies in the
courage and the confidence, nay the charity, of receiving?

And who are you that men should rend their bosom and unveil their
pride unabashed?

See first that you yourself deserve to be a giver, an instrument of giving.

For in truth it is life that gives unto life- while you, who deem
yourself a giver, are but a witness.

And you receivers- and you are all receivers- assume no weight of
gratitude, lest you lay a yoke upon yourself and upon him who gives.

Rather rise together with the giver on his gifts as on wings;
For to be over mindful of your debt, is to doubt his generosity who has
the free-hearted earth for a mother and God for father."
Posted by Wanjiru Kamau-Rutenberg at 9:28 PM 1 comment:

Speaking at the University of San Francisco

Since my dissertation is on ethnic politics and gender politics in Kenya I wanted to share with our supporters in the Bay Area an opportunity to come continue the ongoing discussions.

I will be giving a talk on my research and the ongoing crisis in Kenya at the U. of San Francisco where I am a doctoral fellow this year.
The talk is titled:

"Kenya in Post Election Crisis: A discussion of the historical and political roots of the ongoing post election crisis"
It will be in the Maraschi Room of Fromm Hall right on campus and is scheduled for Thursday February 14th from 5.00 to 6.30pm.
Posted by Wanjiru Kamau-Rutenberg at 11:10 AM No comments:

What Dr. King would have told Kenyans....

This post is reproduced from the blog of MASH INC and is so good I just had to post it again!

On this day we mark MARTIN LUTHER KING JR. DAY, and as fate would have it, his addresses almost 40 odd years ago seemed to have been directed to Kenyans just as much as to Americans!

To RAILA ODINGA AND THE ODM MASSES….
The limitation of riots, moral questions aside, is that they cannot win and their participants know it. Hence, rioting is not
revolutionary but reactionary because it invites defeat. It involves an emotional catharsis, but it must be followed by a sense of
futility.
Martin Luther King, Jr., The Trumpet of Conscience, 1967.

Nonviolence is the answer to the crucial political and moral questions of our time: the need for man to overcome oppression and
violence without resorting to oppression and violence. Man must evolve for all human conflict a method which rejects revenge,
aggression and retaliation. The foundation of such a method is love.
Martin Luther King, Jr., Nobel Prize acceptance speech, Stockholm, Sweden, December 11, 1964.

TO ALL KENYANS “WA TABAKA MBALI MBALI”…
Man was born into barbarism when killing his fellow man was a normal condition of existence. He became endowed with a conscience. And he has now reached the day when violence toward another human being must become as abhorrent as eating another’s flesh.
Martin Luther King, Jr., Why We Can’t Wait, 1963.

It may be true that the law cannot make a man love me, but it can keep him from lynching me, and I think that’s pretty important.
Martin Luther King, Jr., Wall Street Journal, November 13, 1962.

Darkness cannot drive out darkness; only light can do that. Hate cannot drive out hate; only love can do that. Hate multiplies hate, violence multiplies violence, and toughness multiplies toughness in a descending spiral of destruction….The chain reaction of evil–hate begetting hate, wars producing more wars–must be broken, or we shall be plunged into the dark abyss of annihilation.
Martin Luther King, Jr., Strength To Love, 1963.

Like an unchecked cancer, hate corrodes the personality and eats away its vital unity. Hate destroys a man’s sense of values and his objectivity. It causes him to describe the beautiful as ugly and the ugly as beautiful, and to confuse the true with the false and the false with the true.
Martin Luther King, Jr., Strength To Love, 1963.

Man is man because he is free to operate within the framework of his destiny. He is free to deliberate, to make decisions, and to choose between alternatives. He is distinguished from animals by his freedom to do evil or to do good and to walk the high road of beauty or tread the low road of ugly degeneracy.
Martin Luther King, Jr., The Measures of Man, 1959.

TO ALL CLERGY….
The church must be reminded that it is not the master or the servant of the state, but rather the conscience of the state. It must be the guide and the critic of the state, and never its tool. If the church does not recapture its prophetic zeal, it will become an irrelevant social club without moral or spiritual authority.
Martin Luther King, Jr., Strength to Love, 1963.
Posted by Wanjiru Kamau-Rutenberg at 11:06 AM 2 comments:

Report Acts Of Violence In Kenya

How and Why this blog?

I’m curious about what happens when an African in the Diaspora attempts to reach back home and make things better?

What happens if you carefully select a group of brilliant but impoverished girls, erase their financial worries with full and comprehensive scholarships, and build a network of professional Kenyan women to act as mentors to them? Can they succeed? Will they become the next generation of the country’s women leaders?

I’m sick and tired of studying, researching and writing about Africa, women, power and everything that’s supposed to be wrong with . I’m naïve enough to think I can do something about it. I am trying to be the change I want to see.

Sometimes I think all these things and kick myself for starting down this path. But truth is, I am doing Akili Dada because I have to. I do it because my spirit would remain restless if I didn’t. Running Akili Dada fulfills a deep part of me. Working on Akili Dada feeds my spirit so I keep doing it.

This blog is about the journey to achieve a naive dream. So far there have been disappointing setbacks but those are overwhelmed by the surprising successes.

The story is not over yet...